I’m always looking. The Tuareg of the deep Sahara fascinate me.  I want to see how they keep their identity despite this global onslaught.  I yearn to soak up the whites, the blues and the blacks that transcend our different cultures.  I want to come face to face with these people who live on the other side of our same globe.  Everything in this world is linked, held together by diversity.

Is it luck or does wanting make it so? Whichever the case, my dream becomes a reality! Valeo decides to sponsor Luc Alphand’s team for the Dakar Rally, and they ask me to do a series of photo shoots in the Sahara.  I start scouting for locations in southern Algeria, in Djanet near the Libyan border.  I would never have imagined that an arid desert like this could hold such richness in its landscapes, its history and its cultures.  Great dunes rise up before me in shades of black, white, salmon and crimson, glittering in the midday sun or sleeping beneath starry vault of night.  Such skies make me think that we are not alone in the universe after all.  I see mountains full of cave paintings and carvings; images of felines and fish who speak silently of oceans which have long since disappeared.

How can we explain the remains of mighty mountains which crumble and return to dust, just like our bodies, all life, all things?

I have the good fortune to meet three Tuareg men who guide me to the world heritage site of the Tassili.  We venture into the desert, in search of nomads who live in this harsh and unforgiving environment. (A dip in the waters of desert oasis helps us to see the beauty in their lifestyle).  After a few hours, I come across a giant rock, soaring as high as the Eiffel Tower.  Images seem to emerge from the stone; Christ and his apostles, a woman with child. Awestruck, I hide behind my camera to take a photo.

At the base of the rock I see traces of drawings at least three thousand years old.  They seem to speak of sacred rites between ancient peoples from long-lost worlds.  Unlike others, Western civilisation, given over to materialism, has slowly lost its spirituality.  Yet we all share the same planet, a tiny floating speck in a vast universe.

The Tuaregs, true to their tradition, prepare tea and invite us into their tent, wanting us to feel at home.  I set up my “studio” that night to capture the serene calmness of their faces. They are relaxed, completely comfortable in front of the camera.  I’m not surprised – these are proud men and I feel their esteem and respect.

Extremely shy, the Tuareg women wait patiently behind the tent for me to invite them in.  I keep them outside unnecessarily, not realising for several minutes what I was supposed to do.  I capture their faces for the Memory of Colours.   Nobody wants to sleep and I shoot late into the night. The women disappear just as suddenly as they came, leaving us a amazing feast of candied dates, delicious couscous and goat meat cooked to perfection.

Later, in the darkened dunes, I experience something truly exceptional.

No one told me about the lunar eclipse.  Without warning a dark shadow begins to creep across the surface of the moon, creating a spectacle of natural fireworks in the sky.  I never could have dreamed something so beautiful!  Jupiter and Mars shine brilliantly as the powerless Moon is engulfed in the Earth’s shadow.  All that remains is a thin ring of fiery red. The sky is velvet black with a million flecks of light.  I wonder if somewhere out there a man just like me, sitting the ground, gazes in awe at the same miraculous show.  I dream of a galaxy with a thousand shining suns and moons; inspiration for a universe of poets.

When the moon emerges once again from behind Earth’s shadow, the Tuareg women begin their wild ululations.  I am speechless and utterly still for the next two hours.  This day has made my head swim; my eyes are drunk with a million images.

Making every possible effort to reproduce this beauty in my photographs, I almost forget the original purpose of my trip.  I’m supposed to be here shooting models out amongst the dunes.  As much as I’d like to, I realise that bringing a team of twenty here is just not feasible.  I realise that this journey was taken, more than anything, to keep the memory of colours alive. 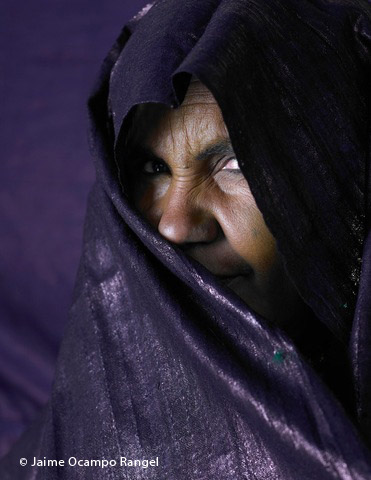