In my quest for endangered cultures in the far corners of the globe, I had completely overlooked one remarkable tradition found right on my doorstep.  Just 500 kilometres from Paris is a region where women don a headdress, called a coiffe, which reaches the sky.  Today, eleven women are keepers of this ancient tradition which is, sadly, destined to disappear with them.

One morning, my friend and former TV journalist, Jean-François Robinet, wakes me up calling to say, “You have to go to Pont l’Abbé at the tip of Brittany.  Go in search of the Bigoudène!  Find them!”

The region, called the Pays bigouden, has its own customs, language and music — and of course its famous, elegant coiffe headdresses and its hand-made lace.  Until now, everything I had known about the Bigoudène came from the packaging of Breton cookie boxes.  I assumed the custom had died out long, long ago.  I phone the Pont l’Abbé City Hall and they tell me regretfully that, yes unfortunately, the custom had died out.

This hurdle seems a rather large one to overcome, so I take a step back and run into a steadfast Breton named Bruno.  Bruno promises me that there are still eleven authentic bigoudène remaining.  In fact, it’s Bruno who is their guardian, protecting them from people who too often show a lack of respect.

As with all my other trips, my wife and I prepare together; buying the cloth backdrops and making arrangements to meet the protector of this last holdout of Breton women.

A meeting is arranged for the following day, next to an ocean as fierce and resistant as the people who live on its coasts.  I learnt how to sail from a Breton — and almost lost him overboard in the process.  I was scrambling to control the sails during a wild Atlantic storm in the middle of the night while he was sleeping calmly on the deck.  We shared many adventures together, him and I, in the company of whales and sharks.  No other area has given the world so many legendary mariners.  I like to come and lose myself in the islets off the jagged Breton coast, lined with history and soaring cliffs, pummelled by constant waves.

A woman steps out of her small, seaside house, smiling, despite her reluctance to pose for a Colombian photographer (something she later admits).  Her extraordinary face contains the history of her people.  I muster all my diplomacy and tack to tell her about the project.  She invites us into her house, simple but immaculately maintained.  I feel as though I’ve walked into an Arthurian fairytale.  She’s rather reluctant, but listens to our project nevertheless, and we set up our “studio” on her terrace.

She gets ready for the photo shoot, carefully arranging every detail of her coiffe.  In the end, the winds get the better of us and prevent us from working outdoors.  The house however, is firmly anchored against Brittany’s gales and we retreat back inside.

At the end of the shoot, we make a toast with a bottle of cider.  I thank the woman for accepting to pose for us so graciously and ask her if she could, possibly, try to convince her reticent Bigoudène friends to pose for me as well.  The next day they invite us to come by and serve us Breton cookies as soon as we sit down.  After a lengthy discussion they agree that their traditional costumes, although fleeting, are an important cultural heritage.

My photographs document evanescent civilisations.  If we can now capture virtual images of the creation of the universe, I wonder about the future fate of my photos.  What kind of traces will they leave behind?  No matter what we try to do, time always gets us in the end.

The next day we organise another photo shoot with Bruno.  First order of the day: figuring out how to fit the women and their very tall headdresses into the car.  While taking a photo of this operation, one of the Bigoudène tells me she’s seen me before, perhaps in a dream.

We set up the “studio” and the Bigoudène give us the freedom to move the furniture and do as we’d like.  We have to find a way to bring out the subtle nuances of black, not an easy task.  The flashes bother the women and I know I have to make every frame count.  My favourite picture is the first one I take.  It will be later used in newspapers stories about a conference on Brittany which I’m asked to attend.

The Bigoudène tell us sad stories about how the Breton language was repressed for long years and how their grandchildren are ashamed to be taken to school by their grandmothers because of the coiffe. They talk nostalgically about the past and about saving their cultural heritage.  Fest-noz music festivals are another important part of Breton culture.  Traditional music is played and people dance in rows, stomping the ground with their feet. (Many of these dances were designed to level out the earth before building a house or threshing grounds).  Fest-noz music is repetitive and hypnotic, carrying you away, almost like a trance, into another world — a country within a country.  The Bigoudène are proof that regional traditions can be integrated into modern life.

I hope the people of Brittany will protect and preserve this rich, unique culture. 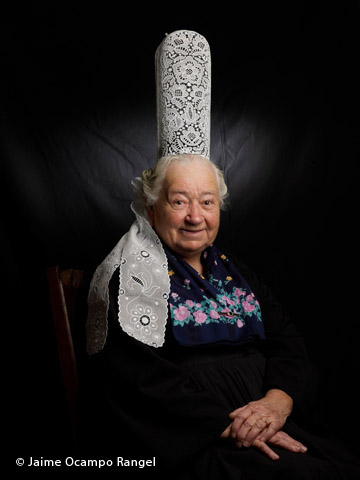 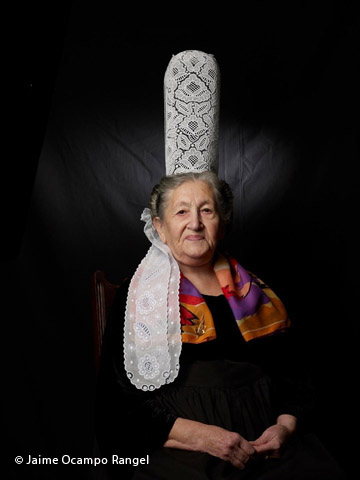