At the airport in New Delhi, we’re surprised to see a sign that reads “Incredible India”. But when we arrive in Allahabad, two thousand kilometres from the capital, we begin to see the reality of these two words.

Following the cycle of Jupiter, the Khumb Mela takes place four times every twelve years, rotating between the holy cities of Nasik, Ujjain, Allahabad and Hardwar. It is the largest spiritual gathering in the world. At Allahabad there are ten million believers, an entire metropolis in motion. Pilgrims flock from the farthest regions of the country to participate in the purification ceremony in the holy Ganges River. The confusion of people is indescribable.  Words are not enough; it really must be seen. Groups arrive from all over India with different languages, customs, and religions — not to mention their different colours. The ............ orange, the … yellow, the ……… red and green. All the colours of the spectrum are right in front of me.  Ancient cultures and age-old traditions all joined together in a single place.

I was right. I can see the “colour wheel” clearly now.

Each group of people feels a need to match up a colour with their vision of the earth in order to help them love and respect it.  Perhaps without knowing it, they search for a something from the rainbow. Diversity has many colours, but we can see the effects of globalisation poking through.  Little by little, black is becoming the colour of choice for people the world over, jeans the new uniform. Colourful people who go against the trend stand out and are rebuked.

I can’t believe the amount of dust raised by this mass of people. It gets into my eyes and coats my skin and isn’t safe for my equipment. The followers gather together to pray and worship many gods. I notice little golden temples, and stands with powders, ointments and statuettes.  There are signs pointing the way to the different meeting points for the pilgrims.

My aim is to photograph the worshippers I consider to be the most unique of all: the Sadhus who live in the nude.  Their concept of life fascinates me. They focus only on the spiritual, removed from the material world, not worrying about how they will eat tomorrow.  The Sadhu’s philosophy of renouncing material things is slowly starting to resonate in the West.

I have to make them understand that for me photography is a way of writing with light.

The word photography is composed of two Greek words: photos – light and graphia from graphein – to write.  Like Marcel Proust’s madeleine, photography throws us back in time, a sort of “time regained”. Nostalgia of the past.  This way of travelling back in time often frightens the populations I meet, posing additional problems for the success of my project.

I hope that the Sadhu will allow me to take these photographs.  They cover their bodies in ash and I’ve brought some from a Parisian fireplace to offer them.  I’ve brought light grey backdrop from Paris too, but unfortunately I can’t find them.  I content myself with the colours I see among the …, the……

Spiritual people are oftentimes more comfortable dealing a woman and my wife, Lia, is always a tremendous asset.  I couldn’t, however, persuade her to drink tea made with water from the Ganges, offered by my hosts.  I drink it out of love.  Despite this –or maybe because of this?– I’m the only one who doesn’t fall ill during the trip…  I wade into the river up to my knees to grab a banana floating past and my companions stare at me astonished as I eat it.

I try to submerge myself in their way of life; I breathe in their myrrh, I let myself be carried away by their transcendental chants and I bless their gods that drew me here. For a moment, I feel “Indian”. I almost pass into a trance, before reality brings me back: where are the Sadhus?  They’ve gone to another mystical location, I’m told, before going back to the regions where they live cut off from the world.

I decide to go after them.

Five hundred kilometres later, we find ourselves in an impenetrable crowd of people. Insane traffic: bicycles, pedestrians and cows use the same road, raising a racket of honks and shouts. The disorder is incredible with everyone, all the castes, mixing together, at times not so peacefully. We are in Benares/Varanasi, one of India’s most sacred cities.  Devout Hindus hope to be cremated here, believing that the holiness of the place will free them from samsara, the repetitive cycle of life and death. Permanent pyres send the ashes of a thousand corpses into the Ganges.  The brightly coloured temples become pastel in the river mist.  At nightfall, the dark sky is reddened by fire from funeral pyres and religious chants resonate off temple walls. Offerings to the gods are everywhere, while monkeys reign over empty palaces like a Fellini film.

I enter the most wild and extravagant temple I’ve ever seen, the famous Golden Temple.   Filming is not allowed — my profession isn’t very well regarded here.  There is space for prayer to different gods, some to bring good, others to take away evil.  In exchange for a few rupees the faithful cover me with flowers, and paint my forehead and hands with coloured ash. I leave the temple wreathed with garlands and my arms full of amulets for good luck.  Time will prove how efficient they are.

At four in the morning we are awoken by deafening chants, and we set of to visit this city of surprises. That’s when I notice the Sadhus in a hut by riverbank. I approach and ask to speak to them, using my language of international hand gestures. I explain why I want them to be a part of my project.

They accept at once, and we decide to meet tomorrow.  As I’m walking away, I’m lucky enough to meet more Sadhus who also agree to my proposal.  I organise a photo shoot for each one, keeping in mind local attitudes about timekeeping.

Early the next morning, with my wife and my daughter helping me carry the equipment, the interpreter explains the philosophy of these living gods.  They pose, with dignity, unashamed of their nudity partly hidden by long beards.

A noisy crowd grows constantly around us and begins to annoy the Sadhus. We exchange silent glances and leave, making our way through the crowd.  I notice a certain complicity in the eyes of one of the Sadhu who looks at me fixedly as we walk away.

We decide suddenly to drive to Kashmir. We are obliged to hire a driver. Why? There are no signs, the one way roads un-indicated, traffic is completely chaotic.  To drive here is to take your life into your hands.  The sides of the road are scattered with shells of wrecked cars, while the road swarms with everything that moves — people, animals, trucks so heavily laden they defy the law of equilibrium.

The trip is very long, and once we arrive I have a hard time getting pictures of the women, always hiding behind their husbands. While taking a photo of a man, I explain to him that I would like to take a shot of his wife’s beautiful, colourful dress. They have just gotten married. I manage to get a shot of the young couple arm in arm, and then one of the woman by herself.

Kashmir is captured in a single photograph.

I’m not at all interested by the other inhabitants in their Western clothes. Happy with the photos I’ve taken, I decide to do the trip backwards: Kashmir, Allahabad, New Delhi, until I’m back in my small Montmartre apartment.  The life our civilisation imposes is waiting for me here, and it’s here I can study the results of my work. 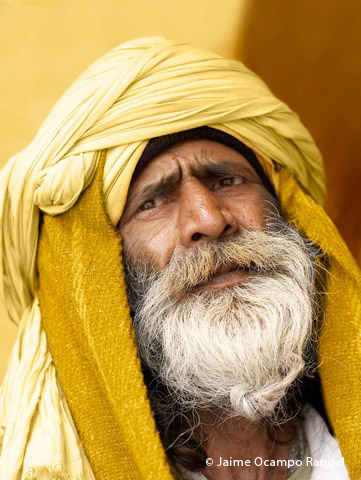 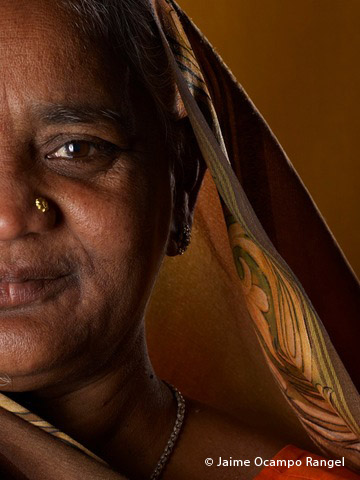 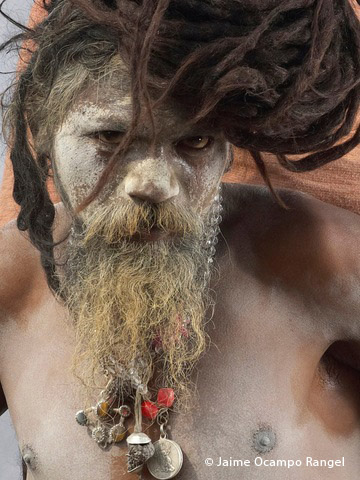